skip to main | skip to sidebar

DAHLIAS OF THE STORM

It's New Year's Day. I SHOULD have recovered by now from a traumatic scene that takes place during every November's first big storm.

Typically I'll be lounging on the sofa, peacefully watching a favorite Marx Brothers movie. I'm eating Frito Scoopers with tahini, and thinking how it's almost time to put the three-cheese ravioli on the table. The windows are lashed by icy rain or some variation of huge record-breaking dumpings of snow driven by gale-force winds. I think how cosy it is inside, all warm and comfy.

But as I stare hypnotized at the sleet flowers on the window, very slowly I realize that the storm is sure to bring about the season's first hard freeze. And at these words, the hairs on the back of my neck slowly rise. Surely I didn't forget, once again, TO DIG UP THE DAHLIA ROOTS AND BRING THEM SAFELY IN?

Five minutes later a puny figure can be seen in the garden, through the blizzard, frantically digging. She is alone, since she tried to persuade the family dogs to come out with her, but they were too smart. She spades furiously, trying to separate the dahlia roots from clumps of ice forming around them.

Swags of snow cover this figure and turn her into a shoveling snowwoman, or perhaps there's no snow but only sleety rain under a thunderously swollen black sky torn by zigzags of lightning, striking close. No matter; she digs on, cursing. She has to.

Finally the roots are chipped and gouged out, and rushed to the house in a bucket as the snowwoman trips over ice chunks and loudly screams "Shit!" It's painful to recall that only a week before, on a honey-scented fantastically warm afternoon, she sentimentally admired a late rose.

Six months pass. Spring comes. I put it off, but the day comes, as it always will, when I have to go to the basement and open the bags of dahlia roots I'd sealed shut on that storm-driven night in November.  I look at them hard. They look dead as nails: dried, shriveled, unpromising. They haven't made it, and it's all my fault. While I was indulging my craze for Marx Brothers movies and Frito Scoopers, the fragile dahlia orphans were perishing in the storm.

But then I take another look. In the cold, dark basement air, it almost seems as though there's a tiny red ember on one of the roots. When I keep looking, very close, I gradually see that each root has one or two minute red fronds.

They are sturdy, alive, and seeking the light. And that is all it takes. 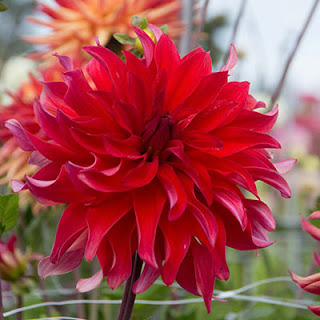 Posted by Margaret Benbow at 7:57 AM